As I posted a little while ago, the poor LA Dodgers have been driven into bankruptcy by the smarmy and incompetent Frank McCourt.

Today, it was revealed that a group called the Guggenheim Baseball Partners; that includes former basketball star Earvin “Magic” Johnson, will acquire the Los Angeles Dodgers for $2 billion.

THE GBP AND THE MBL
The Guggenheim Baseball Partners will officially acquire the team, one of baseball’s most storied franchises, after the deal is approved by the judge overseeing the Dodgers’ bankruptcy.

The Guggenheim Baseball Partners is controlled by Mark Walter who is the CEO of Guggenheim Partners, a Chicago-based financial services company which formed GBP.

The Guggenheim Baseball Partners includes Magic Johnson, who guided the Lakers to five NBA championships during the 1980s, is a partner in the group along with movie executive Peter Guber and baseball executive Stan Kasten.

The Dodgers has won the World Series championship six times and, for decades, boasted an intensely loyal fan base.

UGLY
Under the ownership of real estate developer Frank McCourt, the Dodgers started it’s current downturn. The troubles really began when McCourt and his wife, Jamie, decided to get a vicious and expensive divorce, which was followed by a messy court battle.

The couple fought bitterly over ownership of the team and last April, Major League Baseball took charge of the beleaguered team. Two months later, the team filed for bankruptcy.

This October, McCourt and his wife had reached a settlement in which he is supposed to pay her $131 million, and the joke is that the attorneys’ fees alone could reach $35 million.

In an effort to hold on to the team, McCourt tried to score a $3 billion television deal with Fox, but the MLB decided they really didn’t want this loser to remain and owner, so the deal was rejected by Baseball Commissioner Bud Selig.

Good move by the MLB, since they knew that could earn some serious bank by selling the team, which it did in the auction that Guggenheim Baseball Partners won for $2 billion.

A NEW FACE
Guggenheim Baseball Partners propped up it’s face – Magic Johnson, who said the sale will start a new chapter for the Dodgers.

“I am thrilled to be part of the historic Dodger franchise and intend to build on the fantastic foundation laid by Frank McCourt as we drive the Dodgers back to the front page of the sports section in our wonderful community of Los Angeles,” said the former Los Angeles Lakers’ icon.

It is reported that some members of the group will also partner with McCourt to acquire Dodger Stadium and several other nearby properties for $150 million.

Legendary former Dodgers coach Tommy Lasorda applauded the sale, “I am happy for them. I just feel they are going to do everything they can to bring a championship to Los Angeles,” he told LA TV station KTLA.

The Dodgers finished in third place in the National League Western Division last season and did not make the playoffs.

Maybe hope is now on the horizon.

Hopefully after the sale, Guggenheim Baseball Partners will still have enough money to buy a famous Dodger Dog hot dog… 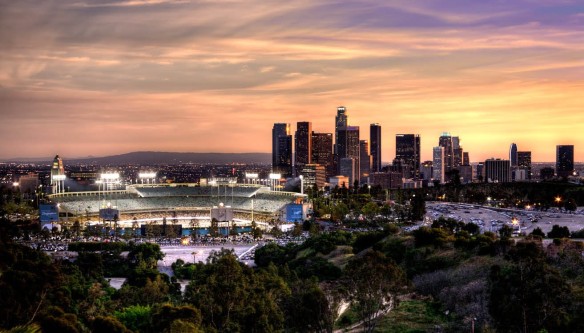